I love getting new books. Love it. The only problem is, normally when I find a book I really enjoy, it has already been published for a few years. I tend to never find out about books I really, really want to read before they’re published. However, I’ve been doing my homework, and I’ve found some books that I’m itching to have on my shelf.

These are the books I’m waiting on to be released this year! What are you waiting on? 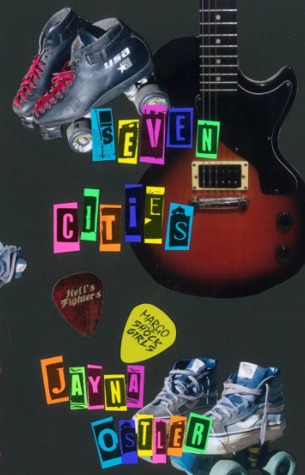 I met Jayna through Camp NaNoWriMo almost two years ago, and we’ve been virtual friends ever since. She’s self-published three amazing books, and I’m so excited for this one! She writes these amazing books filled with imaginary bands and characters that completely capture your heart, and I’m sure this one will be no exception! It tells the story of Malcolm and Dee and their bands as they travel through seven cities. The main characters, Dee and Malcom, are the parents of Quin Talbot, the main female character of Jayna’s second novel, The Openers. This companion, prequel style novel is going to hit me right in the heart, just like all of Jayna’s novels have so far. I’m so excited for the release of this book on February 20th!
You can find Jayna’s book here already (for preorder), but like all her other books, it should be available on sites such as Barnes & Noble, Amazon, iTunes, and Kobo.

I read this book when I was writing for MuggleNet. I got to review this book, and it was such a gem! I quickly became virtual friends with the author, C.L. Gaber, and we speak frequently! She’s just as lovely as her writing, if not more so, and she deserves all the praise!

The first book followed Walker, who recently died and was stuck in this “middle realm” of sorts, where rules don’t apply any longer. However, she does the least expected: she falls in love with the mysterious Daniel. While in this middle realm, she encounters a ton of crazy activities, and even though life appears to be much better where Walker is, it turns out, people still need saving. The first book ends on a cliffhanger of sorts, and I’m thrilled for the next book to be released. I’m not sure of the date, nor do I know what exactly will be occurring in the second book, but I’m sure that Walker and Daniel’s adventures are sure to intensify with each page. Check out the first book, and be sure to follow C.L. Gaber on Facebook for Ascenders 2 news! Buy the first book here to prepare for book two!

One with You by Sylvia Day

Okay, I’m being completely honest here. I haven’t actually read any of the books in this series! That’s only because I know they are part of the series, and I’ve heard they are excellent. I don’t want to start a series, then have to wait for the final book to be released. This is supposedly going to be released on April 5th.

I’m not sure exactly what the Crossfire Series is about, but I’ve heard nothing but great things about it. I have the first four books, so I’m definitely anticipating this book so I can finally read the series. I know it’s erotica, and for some reason, I enjoy reading those books. I’ve heard the characters and the story line of this series is absolutely delicious, so I’m hoping the finale lives up to the first four books’ hype.

Nothing More and Nothing Less by Anna Todd

I adore Anna Todd. She interacts so well with her fans and she writes intense and incredible love stories. As you know if you’ve been keeping up with my blog and/or Goodreads account, I love the After series. I’m not ashamed. Apprently, Nothing More (supposedly going to be released in June) and Nothing Less (supposedly going to be released in August) follow Landon’s story – a main and lovable character in the After series. I’m pretty much shaking as I type this, because if you’ve read the After series, you know that in the last book, After Ever Happy, we were left with a cliffhanger of what exactly happens to Landon. Who is he marrying? What’s going on with him? What are his inner thoughts? What does he think of Hardin and Tessa? I want more with Landon, and I’m excited that Anna is giving us the opportunity to find out. Honestly, this woman could write a phone book and I’d still read it. She’s amazing, especially for college aged readers.

So there you go. Those are the books I’m excited about being released this year. I know there aren’t many books on the list, but like I said, I don’t keep up with books that are coming out. If you have any suggestions, let me know! I’m always looking for books to add to my book case!

iThere are no comments

Begin typing your search above and press return to search. Press Esc to cancel.